The Story Behind the World’s Only Single-Origin, Source-Verified Wool Clothing Company 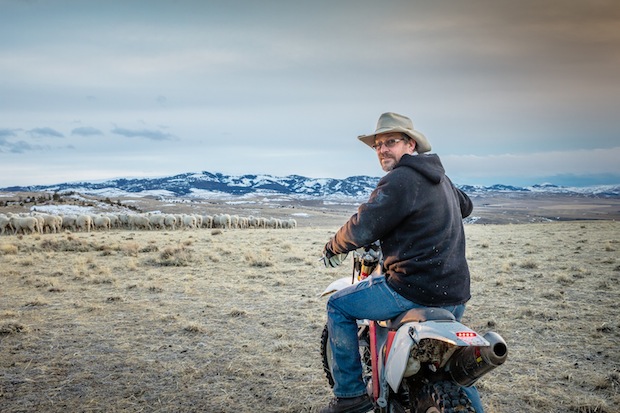 The secret behind Duckworth—a progressive outdoor apparel company based out of Bozeman, Montana—is its fine Rambouillet merino wool fiber. But the deepest thread of the brand’s existence actually links back to skiing.

When fourth-generation rancher and lifetime skier John Helle, 52, received a phone call with a business proposition that would help revive the U.S. wool industry, his litmus test was to take a few laps down Maverick Ski Mountain. The rancher is also a lifetime skier, ski patroller, and was the 2017 overall champ in the men’s slalom and downhill competitions--all at his local Maverick mountain. 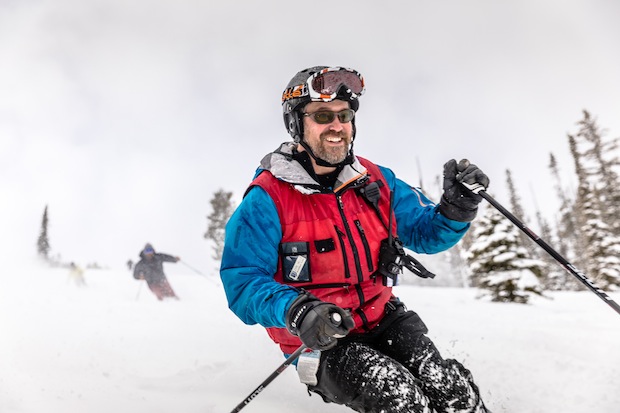 “I wanted to make sure Bernie could ski,” said Helle about Duckworth President Robert “Bernie” Bernthal. “I can only do business with someone whose company I enjoy.”

Lucky for Helle, Bernie could rip. Before the retired athlete became a professional ski mountaineer, he played pro soccer in the ‘70s. They stitched the business plan together on 10-minute chairlift rides, and in 2014, the sheep-to-shelf business took flight.

Enter: Duckworth, the only single-origin and source-verified wool clothing company with its entire supply chain inside U.S. borders. Helle Ranch wool is used to develop their own textiles, and then they use the textile range to create their own brand-designed clothing. The raw material is processed in South Carolina, and then it’s spun, knit and sewn into clothing in North Carolina. 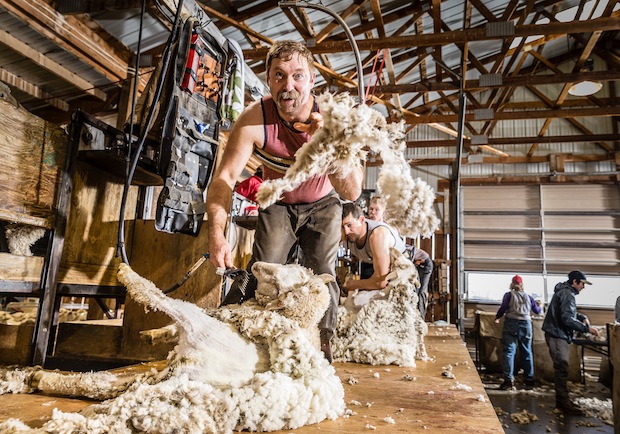 In March, I joined the annual celebration at Helle Ranch dubbed, “Shear and Shred,” which initially sounded more like a rowdy film set for a modern ski- meets Wild West film than a legitimate operation.

Then, the crew tops off the workweek with a shred reunion at Maverick Mountain. 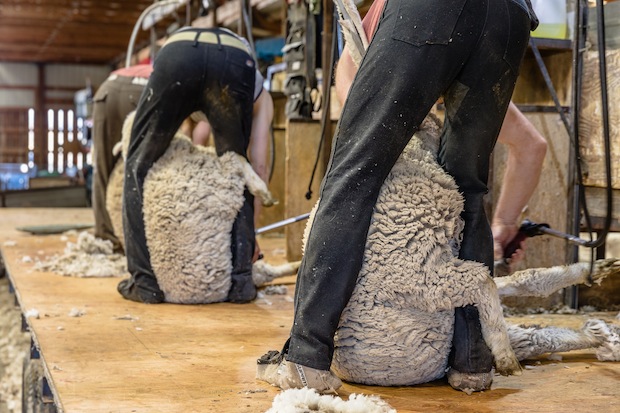 I didn't know exactly what I was getting myself into--but the shear was more sophisticated than I could have imagined.

Inside the barn, a queue of shearers stood on a raised platform in leather moccasins, which help prevent their shoe soles from getting greased up with the wool’s slick lanolin oil. The experts practically unzipped each fleece, in a single sheet, off of every single sheep.

Helle Ranch is home to 10,000 heads, making it one of the largest fine wool flocks in the country.

I took a lesson from shearer Mike Schuldt, who studied the lost art from the masters in New Zealand. Foot and hand placement, razor pressure and speed were all elements of technique--and critical, which became clear as my sheep squirmed between my heels. I was way too cautious and slow. 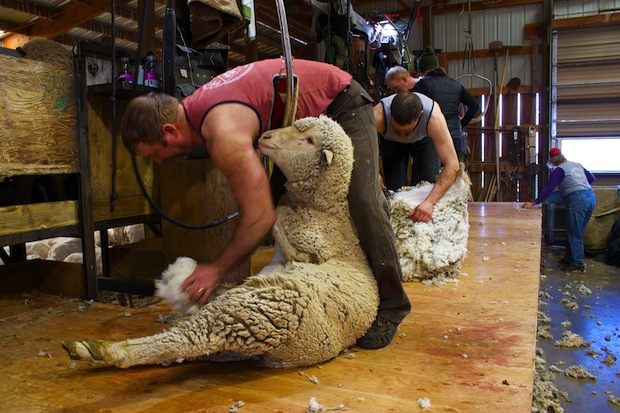 A handful of wool-centric outdoor brands, such as Farm to Feet and Voormi, likewise commit to a domestic supply chain and local manufacturing.

Voormi, launched in 2010, rotates sourcing among sheep herds in the Rocky Mountains and weaves wool into the majority of its designs. Nester Hosiery—a mill founded by Marty Nester in 1993—founded Farm to Feet, a made-in-U.S.A. sock company, in 2013. 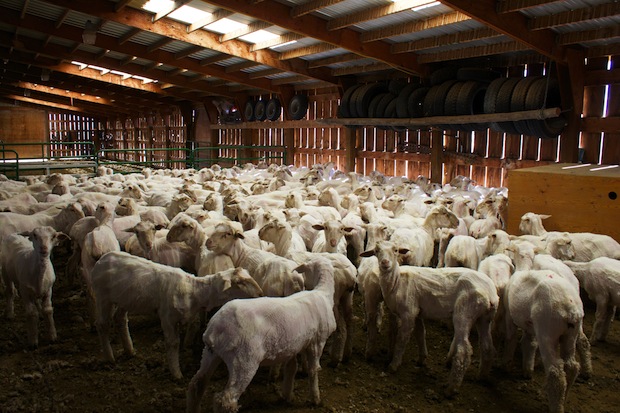 The decision to remain local is no easy feat. In the last decade, many mills have closed or moved their production facilities to other countries. The top 5 wool-producing countries are Australia, China, New Zealand, Russia and Argentina, which has created a greater importance on export markets and the U.S. military for U.S. producers, reports the American Sheep Industry Association (ASI).

Duckworth—co-founded by Helle, Bernthal and wool textile expert Graham Steward—is distinct, because they oversee 100-percent of the process. Out of 5.3 million sheep dispersed between 88,000 ranchers in the U.S.—a small market in the global picture, according to ASI--Helle Ranch is home to 10,000 heads, making it one of the largest fine wool flocks in the country. 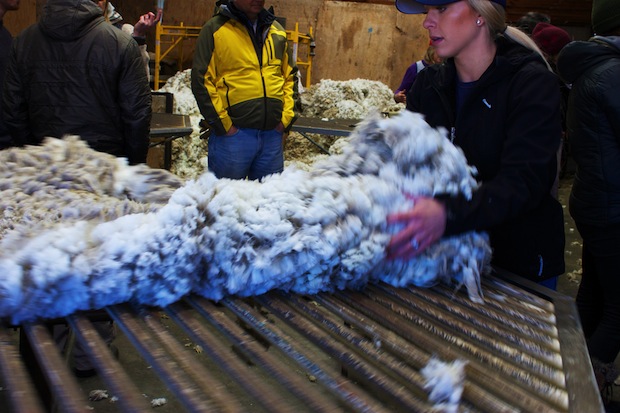 Each fleece is shorn and thrown over a skirting table, which spins so that team members can remove clumps of mud or rough wool. The parcels are tossed into a pile that’s processed into down fill.

Every greasy fleece weights 10 to 14 pounds, yields enough wool for about 10 shirts, and loses half of its weight once all the oil is removed and dirt is washed out. 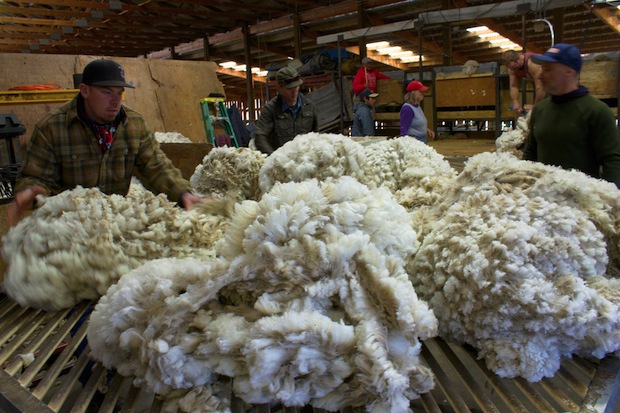 Andy Williams, Wool Lab Manager for Montana State University, stood next to a machine—an Optical-based Fibre Diameter Analyser (OFDA)—sticking his hands in the wool. He could determine the grade just by feel, a classical subjective technique, but the machine adds an objective level to the wool classification.

Williams would pull off a few strands, tug them taut to test for strength, and then scan them into the OFDA to determine the micron (fiber diameter) and the comfort factor (how fine the wool is). 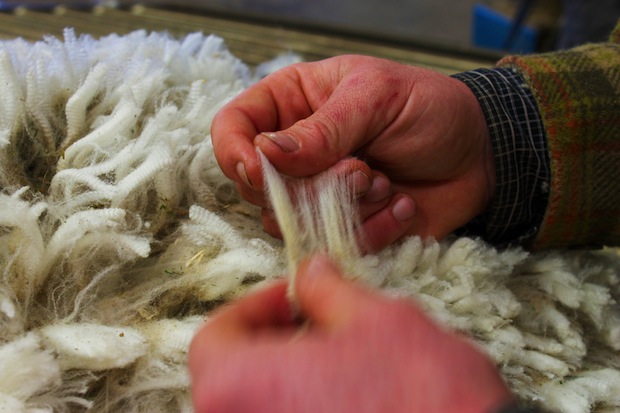 Andy Williams tugs the fiber for each fleece to gauge strength and the wool's overall category. Morgan Tilton photo.

The utility of a fleece—whether it’s used to create a blanket, a jacket’s down fill or an against-the-skin shirt—depends on the length, diameter (which affects the comfort), and crimp.

“The crimp is one major aspect that makes this wool different than any other wool in the U.S. This is like gold,” said Bernie. Crimp carries elasticity, provides insulation, and—combined with the length—adds loft to a garment. 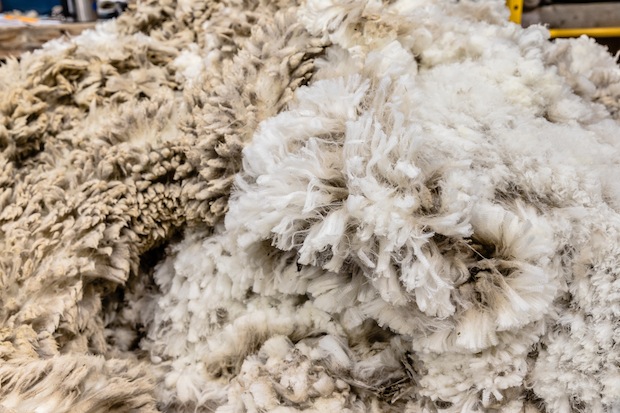 A close up of a fleece. Dan Armstrong photo.

“When we look at animals that have a dual purpose of meat production, as well as a 16.8 micron for a wool crop, it’s unbelievable: This wool here is very profitable compared to some other breeds we raise in the United States that don’t produce wool that’s this fine,” said Williams.

There are only two wool labs in the U.S., the other being at Texas A&M University. The second purpose of the OFDA machine is to track the herd’s genetics data. 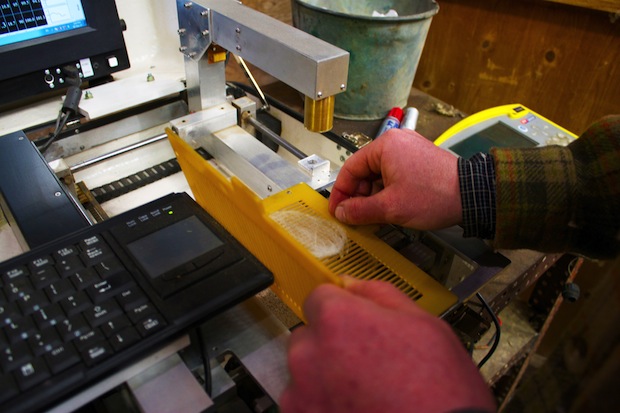 Merinohas become a moniker for wool (and baselayers in general)—but the two aren’t synonymous.

In the 18th century, ‘Merino’ sheep had been long known for their fine wool fibers, and were first exported from Spain. Since then, herds around the world evolve based on selective breeding, and the wool’s traits adapt based on the sheep’s environment. 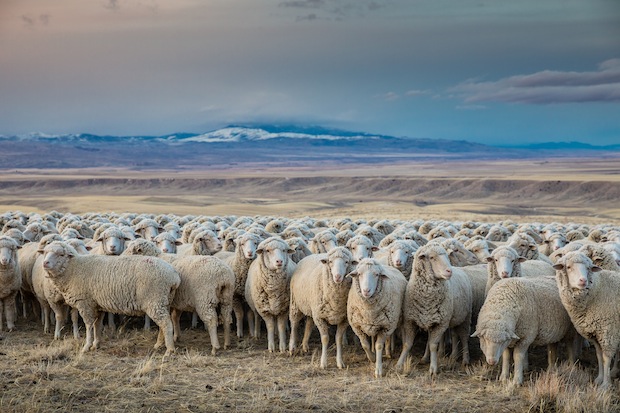 Helle’s Rambouillet hails from France. Due to the herd's hot summer pastures in the Gravelly Mountains at 9,500 feet, and frigid winters at 5,000 feet in the Dillon Valley, the fibers tote more natural crimp than lower elevation or maritime herds.

The weeklong shear relieved 2,000 sheep—not even the entire herd—of more than 17,000 pounds of wool. After heavy hours of hard work, everyone was definitely ready to shred. Fortunate for us, the surrounding peaks were all socked in. 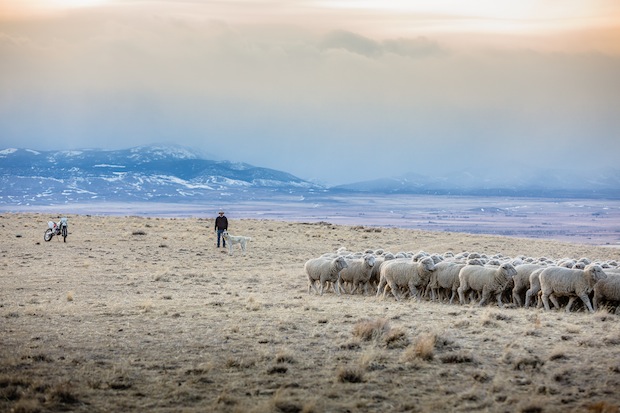 Rolls of hay and windblown snow patched the countryside. Forty-odd miles later we passed a sign from the twilight zone, Ride the White Thunder--Maverick Mountain Magic, which set the day's tone. Maverick, where Helle recreates with his family as much as possible, was blanketed in more than a foot of deep, soft snow.

“In January and February, you get the feeding done and ski a couple of hours or if it’s a good powder day, I’ve been known to come up and ski and then serve the [sheep] brunch,” said Helle, who also works as a patrolman at least one weekend a month. 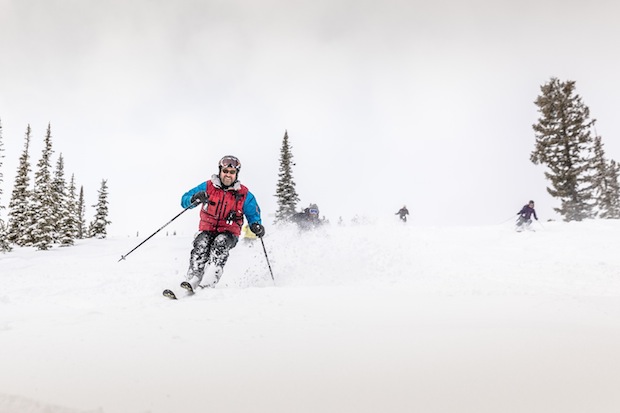 Helle's parents strapped him into toboggan-like skis at 3 years old.When the lift was rebuilt in the 60s, Helle's family started skiing at Maverick. As a college senior, he joined the ski race team. Before co-owner Erik Borge, 30, bought Maverick two seasons ago, the future of the family ski mountain was in limbo.

People from all different walks of life hang out at the bar stools at the end of the day like they’ve known each other for years.

“Randy Shilling owned it for 25 or 30 years, was looking for someone to buy it, and we—the ranchers in the area—wanted to make sure it stayed Maverick. A lot of us ski and want this available to our families and kids,” said Helle, who had brainstormed the possibility of starting a foundation with the area's ranchers to ensure the ski mountain wouldn’t shut down.

“We were concerned who was going to buy it; and as old a hill as this is, it would be hard to close it and get it recertified if it needed to open back up,” said Helle. 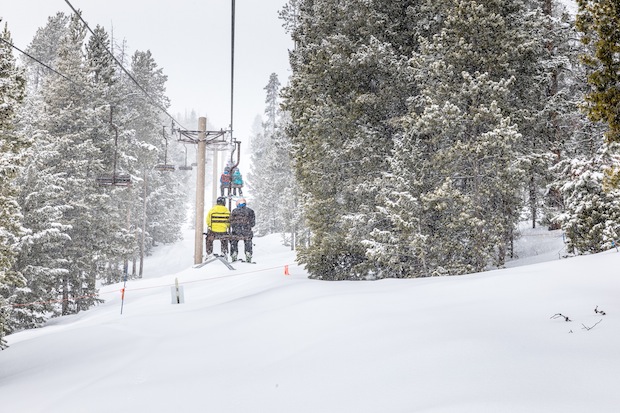 One creaky, archaic two-seater lift climbs 2,000 vertical feetat the family-operated mountain. The area’s 450 acres, graded as mostly expert and intermediate terrain, passed the test for Borge and his wife, who both grew up ski racing.

When Maverick had a sale sign for $600K, they visited and were blown away.

Would you rather own a house or a ski mountain?

“I expected a molehill and we were like—wow, this is sweet. I knew I’d never be bored. The area fits all needs of a skier and still offers challenges with the exception of extreme chutes. So, I asked my [then fiancé], ‘Would you rather own a house or a ski mountain?’” said Borge.

Now the couple lives in a 30-foot RV at the base of the mountain, and Kristi teaches kindergarten through 8th grade at the Polaris school house--to seven students this year. 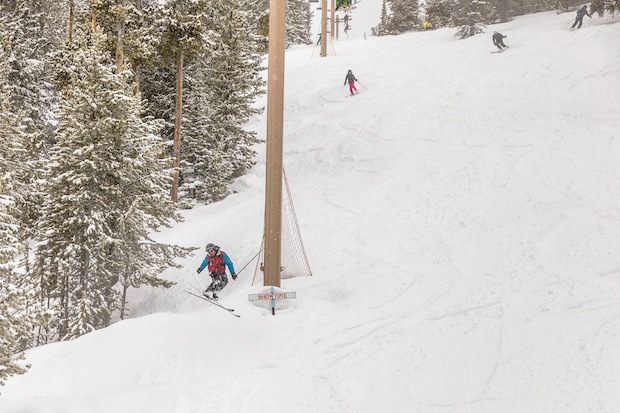 “We know everyone on a first name basis [at Maverick] and it’s mostly families. If you go to a big resort you have a scene. Here, you have people from different walks of life hanging out at the bar stools at the end of the day like they’ve known each other for years. A dude in cowboy hat and another in a Patagonia jacket,” said Borge.

Our day at Maverick was a mix of radical powder, surprisingly long runs, and surrealism. Our adult lift tickets were $25. There’s no need for lift corrals, because the crowds don’t exist. There’s no sound of ski edges, equipment hums or high-speed chairlifts. Everything is silent, and the wide-open, majestically blanketed runs remained untouched until we carved them out. 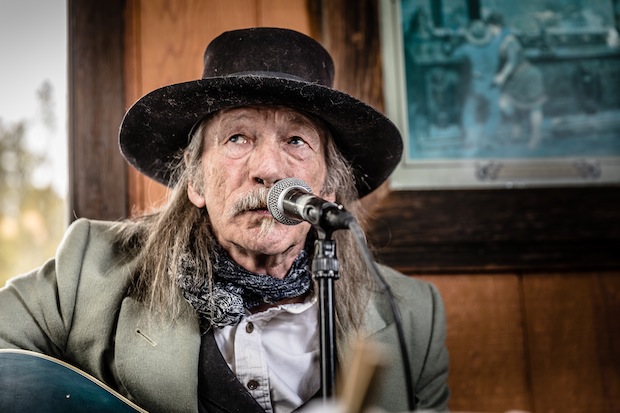 Singer and guitarist Dave Walker opened by sharing his claim to fame--he's been fired by Black Sabbath and Fleetwood Mac--followed by an incredible set. Dan Armstrong photo.

At the end of an awesome shred, everyone walked toward the tiny bar for après and live music: Dave Walker and Bill Dwyer, if you can believe it.

In the parking lot, we ran into Robert Marchesseau—one of the most iconic faces of Maverick—shoehorning his feet from ski to cowboy boots.

His family has been cattle ranching in the area since before Montana was a state, and he helped to put in the first lift poles at Maverick with his draft horses in the 1950s. Marchesseau is still grandfathered in to $2 lift rides. 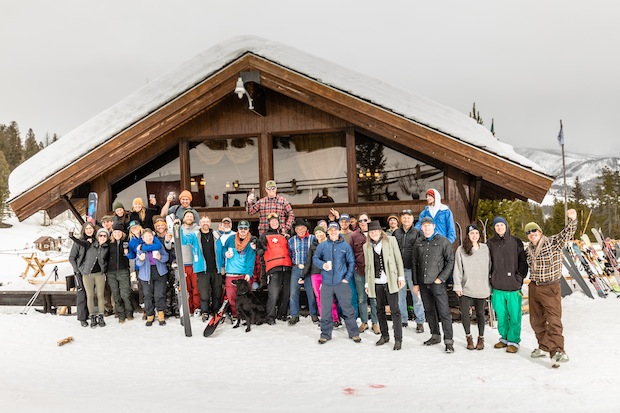 We shook his hand, and Marchesseau joked, “I won a jacket in a raffle a few weeks back here at Maverick Mountain. There’s one problem with it: It says Patagonia, not Wrangler.”

Then he walked upstairs, took the chair next to our crew and a handful of locals, and we watched one of the greatest surprise dive bar performances I’ve ever seen.